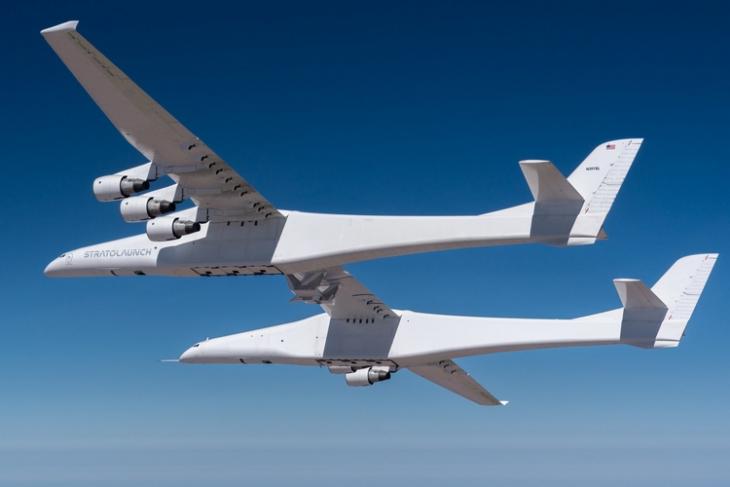 The world’s largest flying aircraft ‘Roc’ has completed its fifth test flight, the aircraft’s maker Stratolaunch has announced. According to the company, Roc flew for 4 hours and 58 minutes over the Mojave Desert and reached an altitude of 22,500 feet (6,858 meters). Here’s a look at the details.

With a wingspan of 385 feet (117 meters), Stratolaunch’s Roc is for carrying hypersonic vehicles. In the latest test flight, the company debuted a new pylon on the aircraft’s center wing to carry and release Talon-A hypersonic vehicles. Talon-A vehicles are rocket-powered, autonomous, reusable testbeds carrying customizable payloads at speeds above Mach 5.

The key initial results from the fifth test flight were the validation of the aircraft’s general performance and handling characteristics. This includes the newly installed pylon hardware. The flight also involved the validation of the landing gear operations, including, door functionality and alternate gear extension.

“The pylon is a crucial component of our combined launch system, and I am proud of the team’s timely and quality integration work that occurred since our last test flight. It is through their dedication that we continue to make steady progress toward achieving our next milestones of Talon-A flight tests later this year,” said Dr. Zachary Krevor, Stratolaunch CEO and President.

For those who don’t know, Stratolaunch Roc took its first flight back in 2019. If you have around 6 hours to spare, you can watch the entire test flight in the video below:

Alongside the carrier aircraft, Stratolaunch is working on system integration and functional testing of its two Talon-A test vehicles, TA-0 and TA-1.

Furthermore, the company has also started the fabrication of its first fully reusable hypersonic test vehicle called TA-2. The goal is to start hypersonic flight testing and delivering services to government and commercial customers in 2023.